Our native Eastern or Canadian hemlock is in trouble and as usual people are to blame. The immediate culprit is the hemlock woolly adelgid which is a small fluffy white bug which proliferates in such numbers that they can actually suck a tree dry. In fact the bugs are so efficient that the southern Appalachians may lose most of their hemlocks within the next 10 years. The adelgid was accidently brought to the US from Asia in 1924 and started expanding rapidly in the hemlock’s southern range in the 1960’s. A project is underway in the Great Smokies to save the largest trees. In their northern range hemlocks are doing better but infection is common in NJ. Thus unless you want to be faced with repeated pesticide treatments you might want to delay planting hemlocks until better adelgid control methods are developed.

The woolly adelgids can be treated with pesticides containing imidacloprid or dinotefuran but complete control is still difficult. The US Forest Service is currently conducting a study attempting to control them with a natural predator Laricobius nigrinus beetles. The study will be completed in 2019 and hopefully we will have an efficient weapon to combat this plague. 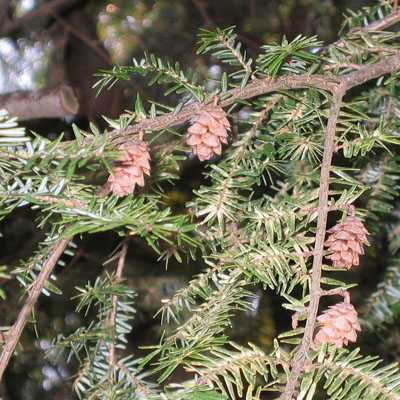 Eastern hemlock, Tsuga canadensis, is our largest eastern evergreen tree. Given good conditions hemlocks can live over 500 years. The record height is 174′ and the largest diameter has been recorded at 5′ 9″. Generally most trees top off at about 100′ with a 2-3′ diameter. The needles are flattened, blunt tipped, and about ½” long. Small trees grow fast and are bushy but they do not make good Christmas trees since they drop their needles quickly. The cones are light brown and petite, only about ¾” so they fit well in miniature Christmas decorations.

Hemlock wood is light and soft. It is used for general construction and pulp for paper manufacturing. It is also used, after treatment to prevent mold attack, for railroad ties since it holds spikes well. Hemlock bark was once important as a source of tannin to preserve leather.

No parts of the tree are poisonous to humans but being conifers hemlocks have the same resinous products as other evergreens which deter insects and larger herbivores from grazing. However, some outdoor rugged individuals actually enjoy hemlock tea. This is not the same hemlock tea which Socrates took which comes from two plants of the carrot family and is deadly. These very poisonous hemlocks Circuta maculata and Conium maculatum are both found in NJ. They are relatively small, herbaceous, water loving plants which look similar to Queen Anne’s lace, the wild carrot. Be sure you do not confuse these two poison hemlocks with wild carrot or wild parsley; this is a mistake you may only make once. Fortunately woody evergreen trees and plants in the carrot family are easy to tell apart.

Paleoecology studies have determined that Eastern Hemlock was one of the dominate trees in the southeastern US forest about 10,000 years ago. From careful analysis it was determined that the population crashed about 5,500 years ago. The cause of this crash is unknown but pathogens or climate change probably contributed to this phenomenon. Later the population recovered somewhat but never rose to the previous peak. One might wonder if hemlocks might again throw off this current plague of woolly adelgid given enough time.

Hemlocks naturally grow in cool moist areas where temperatures do not rise above 95 °F. They do not do well in droughts, full sun, or strong wind. For this reason they are frequently found in ravines near sources of water and in the southern US they are generally limited to mountainous regions.

Propagation is by cuttings, which must be treated with rooting hormones, and by seeds which should be stratified for 3 or 4 months. Over 300 cultivars of Eastern Hemlock have been developed; most of these are bushy dwarf forms. The graceful, lacy branches are produced in profusion and make a beautiful winter display if only the woolly adelgid problem can be solved.